Firstly, don't confuse  Bio Stimulants as biology - because they’re not the same thing.
​
It has been estimated that there are between 1.5 and 5 million species of fungi with only about 5% being formally recognised and classified. Soil fungi are actually microscopic plant-like cells but unlike a plant they have a cell wall which is made from chitin and glutan whereas plant cell walls are made from cellulose.

They  grow in  threadlike structures or hyphae that make a multicellular mass called mycelium. The mycelium absorbs nutrients from organic matter on the surface or in the soil as well as from the roots it has colonised. It produces special hyphae that create reproductive spores which, given the right conditions, then grow more fungi. Each tip contains a set of aggregated vesicles — cellular structures consisting of proteins, lipids, and other organic molecules. Some fungi are single celled (e.g. yeast). Fungi have many different structures but they can act in similar ways, for example some fungi are single celled (e.g. yeast). Some are thus not as plant specific in their needs as some soil bacteria such as Rhizobia. 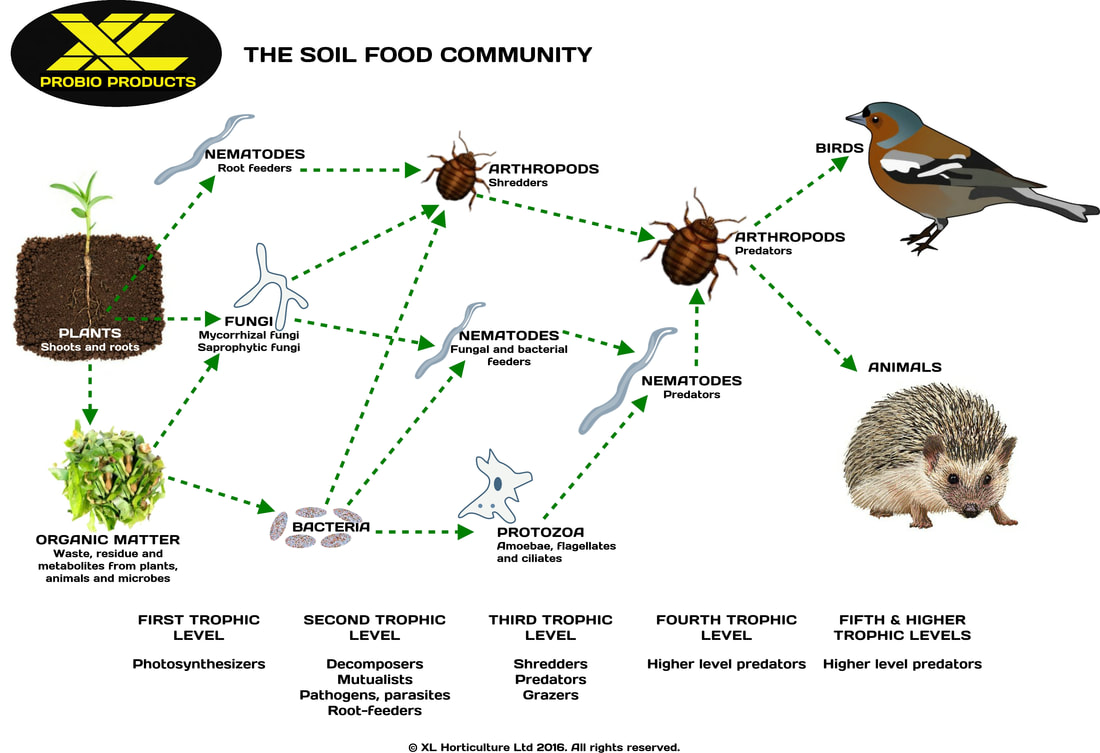 What do Fungi Do?
Fungi perform important functions within the soil. They help to  recycle nutrients, help with disease suppression, improve soil structure and water retention and drainage, all of which improve  plant health and vigour. They help decompose woody organic matter. Along with bacteria, fungi they are important decomposers of organic matter which would otherwise be hard to decompose. They use nitrogen in the soil to decompose woody residues  which are rich in carbon but low in nitrogen and convert the nutrients in the residues  into forms that are more usable by  other organisms. ​

They increase nutrient uptake...
Mycorrhizal fungi are well known for  assisting plants in the uptake of phosphorus. Ectomycorrhizal fungi, which may also  be plant specific, benefit plants by promoting root branching and increasing nitrogen, phosphorus and water uptake.  This is because ectomycorrhizal fungi  have a large surface area, are probably symbiotic and also have large internal cellular mechanisms.  ​

They improve plant resilience...
The sheer size and mass of fungal hyphae present in XL ProBio products helps to  decrease plant susceptibility to pests and diseases by blocking out harmful pests and diseases. They also improve a plants resilience to  drought. ​

They improve soil structure...
​Fungal hyphae bind the soil particles together to create water-stable aggregates which in turn create the pore spaces in the soil that improve  water retention and drainage. ​

Fungi Groups
There are three functional groups of fungi

1. Those that help Decomposition
Decomposer fungi convert  dead organic matter into a fungal biomass (which is their own bodies), carbon dioxide and organic acids. They are essential for the decomposition of hard woody material. By consuming the nutrients in the organic matter they play an important role in immobilising and retaining nutrients in the soil or substrate. The organic acids they produce,  as a by-product, help create organic matter that is resistant to degradation. Fungi are capable of degrading plant cellulose, proteins and lignin, some of which are highly resistant to breakdown.

​2. Mutualists
These fungi develop mutually beneficial relationships - saprophytic relationships - with plants.  They colonise plant roots where they help the plant to obtain nutrients from the soil. Their mass hides/blocks  roots from pests and pathogens and provides a greater root area through which the plant can obtain nutrients.
Mycorrhizal fungi are perhaps the best known of the mutualists. Mycorrhiza means “fungus root,” and mycorrhizal fungi grow inside plant roots. Up to 5million  of living hyphae of mycorrhizal fungi can be extracted from 1g of soil.
The four groups of mycorrhizal fungi are vesicle arbuscular, ectomycorrhizal, ericoid and orchid. Vesicle arbuscular mycorrhiza (VAM) are the most common form of mycorrhiza, especially in agricultural/horticultural  plant associations. This fungi has arbuscles which are growths which form inside the plant root and  have many small projections going into the root cells. About 150 arbuscular mycorrhiza species are known. Most plants (90%) have some sort of association with these fungi except for groups such as the Cruciferae family Chenopodiaceae, and Proteaceae.

3. Pathogens
This group includes the well known fungi such as Verticillium, Phytophthora, Rhizoctonia and Pythium. These organisms penetrate the plant and decompose the living tissue from within, creating a weakened, nutrient deficient plant, or ultimately death. The pathogenic fungi is usually the dominant organism in the soil. Soils with high biodiversity have been shown to suppress soil-borne fungal diseases. Suppression mechanisms include the suite of other native organisms so that they out-compete/block the pathogenic organisms, for food and space, thus physically protecting the roots.

Where are fungi found?
Fungi are found wherever there is hard, carbon-rich woody organic matter. This could be dead rotting trees in a forest, leaf litter or plant roots. Mycorrhizal fungi are found naturally in all soils. Techniques to determine their presence usually focus on indirect methods or look at the colonisation of plant roots and are therefore not that reliable. It is difficult to get mycorrhizal fungi to grow outside their natural state. Microscopy is normally used  in identifying mycorrhiza from soil and plant samples.   Fungi tend to dominate over bacteria and actinomycetes (actinobacteria include some of the most common soil life playing an important role in the decomposition of organic materials and  play a vital part in organic matter turnover and the carbon cycle) in acid substrates as they can tolerate a wide pH range. In the soil, this replenishes the supply of nutrients and is an important part of humus formation. Fungi can survive in the soil for long periods even through periods of drought by living in dead plant roots and/or as spores or fragments of hyphae.

Management of soil fungi
There are several things you can do to encourage fungi in your soil.  To ensure fungi remain in the earth the soil environment must be kept as hospitable as possible. This means there must be enough food (organic matter), suitable host plants (if necessary), water and  minimal disturbance of the growing medium. Reduce fungicide use. Broad-spectrum fungicides are toxic to a range of fungi. Their use will result in a decline in the numbers of beneficial types of fungi. Herbicides are not generally thought to affect fungi, though the removal of some plant types may affect the distribution of different symbiotic fungi types.  Mycorrhizal fungi increase under grasses  because grass includes highly mycorrhizal plants. A low level of mycorrhizal colonisation in plants is also associated with high available phosphorus levels in the soil.   ​